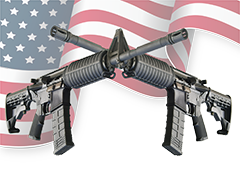 Dates subject to change due to COVID-19 virus.

All matches will be held on the auxiliary range.

Rules of the event:

The range officer instructs the shooter to load his rifle, waits until the shooter is ready, and then gives the RUN IT command. The first shot must be at the flying cross. The flying cross will be run out and back, then out and back again with a 4-second delay at each end. During the delays at the end of the run the shooter shoots at the clay targets. There is also a 4" plate on the cross. This target counts for two points. The total number of hits to the 9" plate and the clay targets hit count as one point each. When the flying cross returns for the second time, the range officer instructs the shooter to cease fire, unload the rifle and make the range safe.

All of the above procedures apply except as follows: