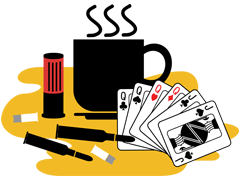 For more information about this league:
contact Steve Olson.

The group is the result of an idea by the late Walt Marquardt, a longtime active member of Daniel Boone and a dedicated participant in the Hunter Safety Program. Walt was at the range one weekday in 1993 when he noted a lone shooter on the skeet field. The shooter’s wife was pulling targets for him, and it soon became apparent she had never done this before. Walt wondered if maybe there could be a listing of members who could contact each other when they wished to have company while shooting. He put an article in the Powderhorn and at the next club meeting several members expressed interest. They agreed to meet on the second and fourth Wednesdays, hence the name 2x4s.

Since that time, the group has grown and they now meet every Wednesday at 8:00 am. An average of about twenty-five Daniel Boone members attend. They regularly shoot trap and skeet, play Sheepshead and periodically shoot running deer. The 2x4s run the rifle sight-in clinic on the weekdays on which it is held, in addition to other chores which are requested of them from time to time. All members of Daniel Boone are always welcome; come out and have some fun with us!